TAOS Musical Theatre are proud to announce that their upcoming production of Oliver! will be sponsored by Paxtons Estate Agents.

Paxtons is built upon providing the best service that they can, with clients frequently saying that they go the extra mile.  Visit their website here or head to 15 Hackett Pl, Hilperton, Trowbridge BA14 7GW 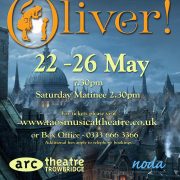 TAOS Musical Theatre are pleased to announce that tickets are now on sale for their new production of Oliver! which runs from 22nd to 26th May.

Oliver features a host of well known songs including Pick A Pocket or Two, Food, Glorious Food, Where Is Love? and many more, and some of musical theatre’s iconic characters, such as the Artful Dodger, Fagin, and Bill Sykes.

The show will feature two teams of talented children, and a fabulous adult cast – full details to follow shortly.